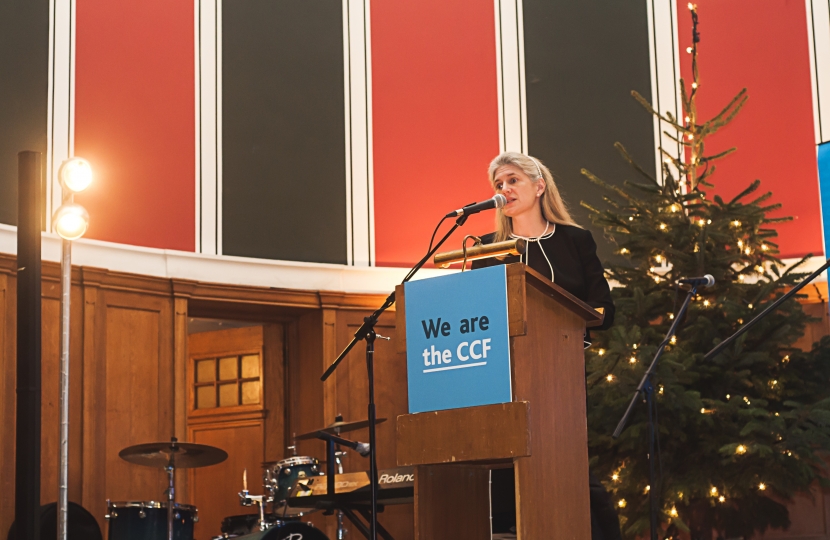 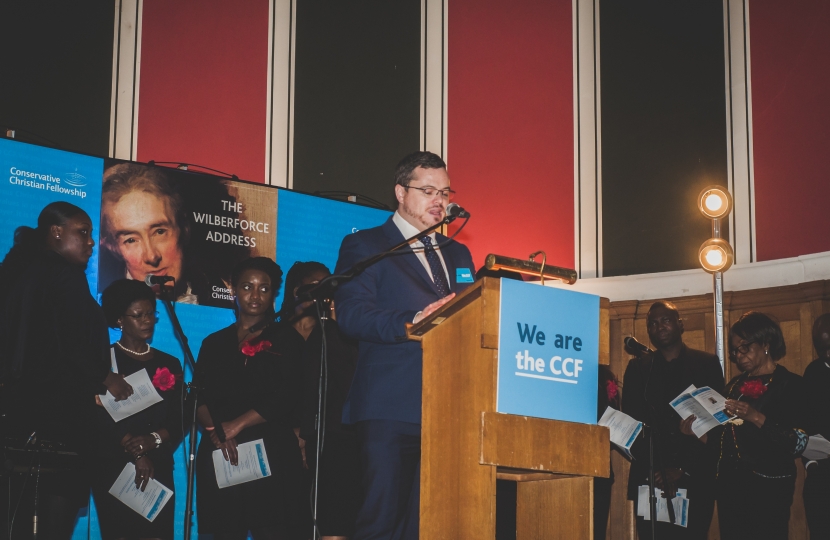 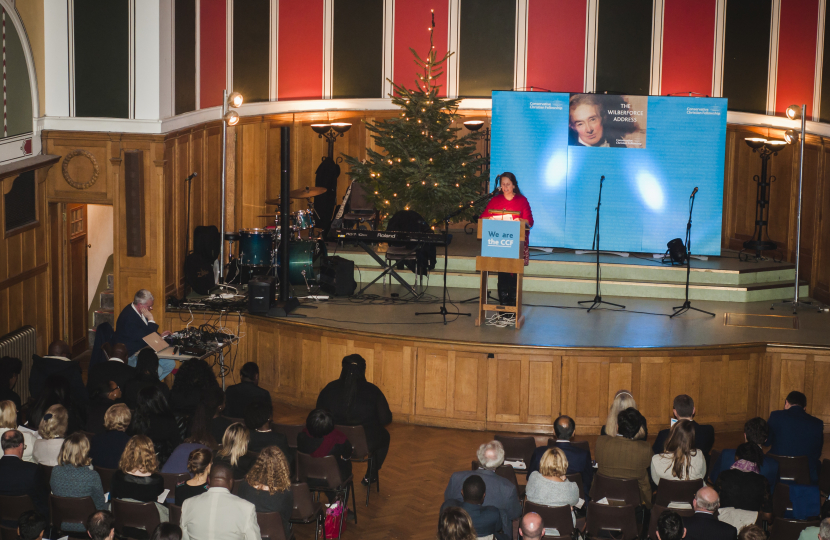 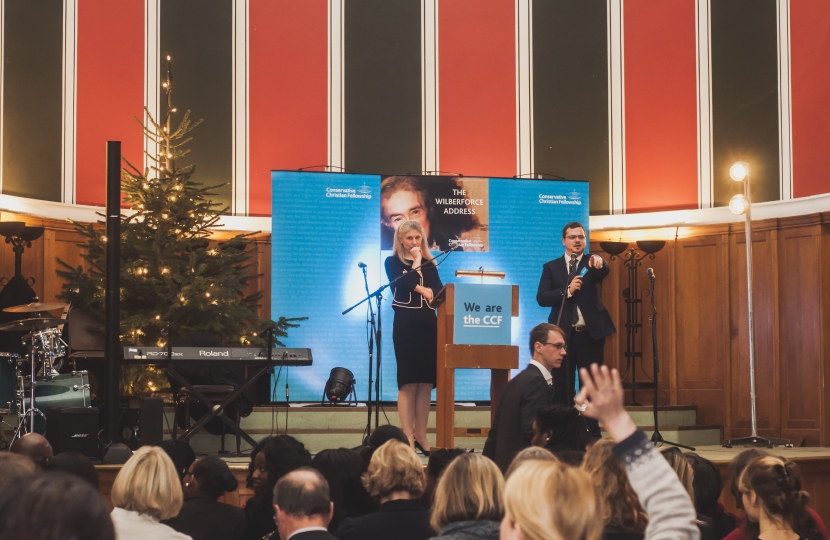 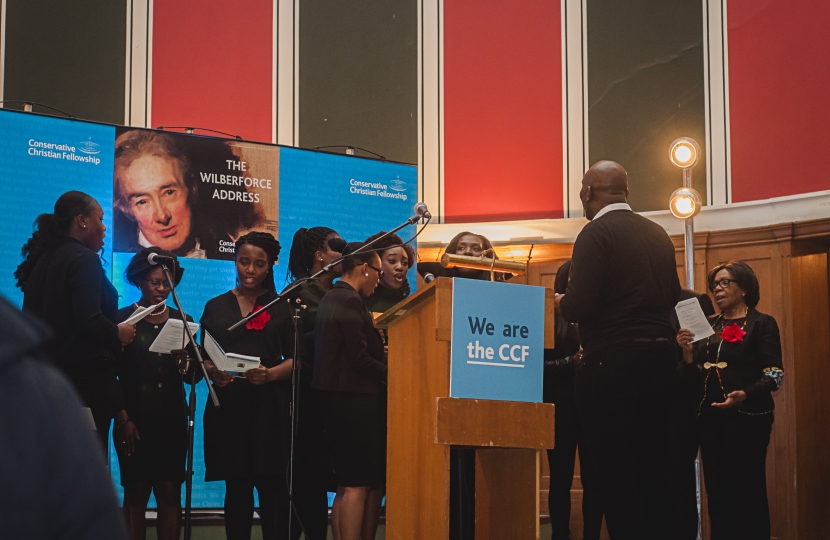 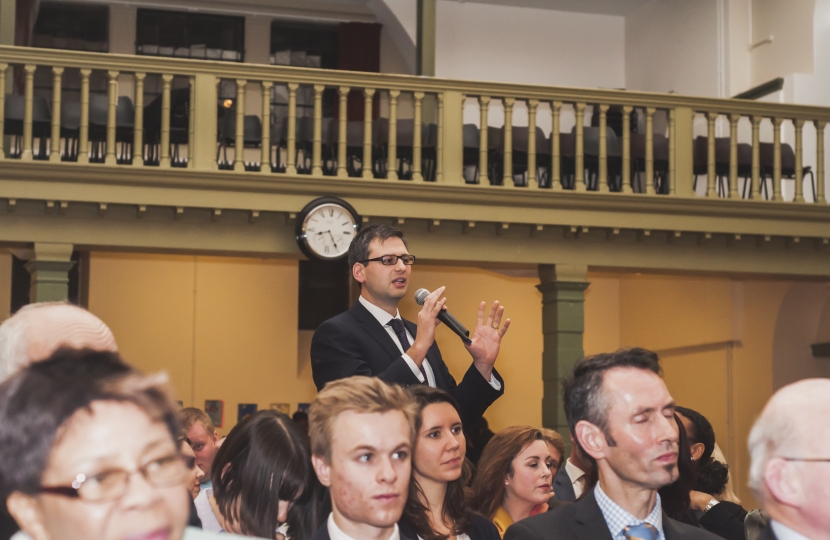 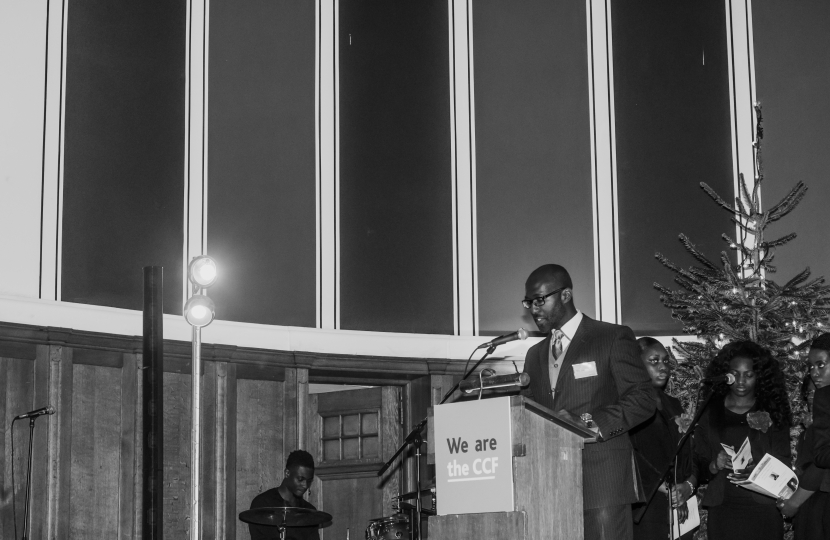 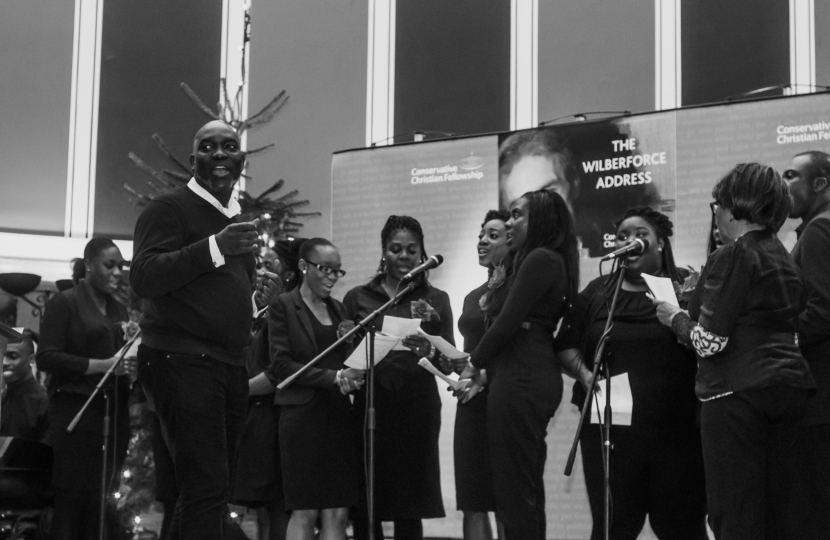 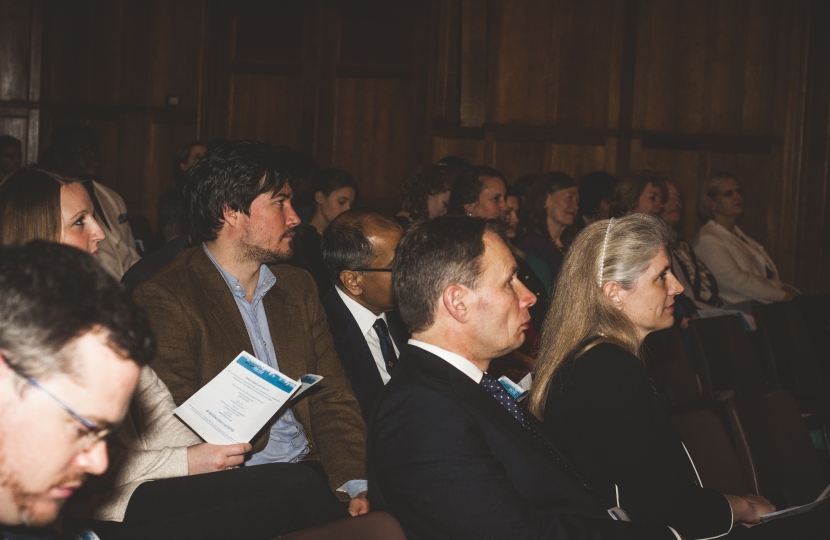 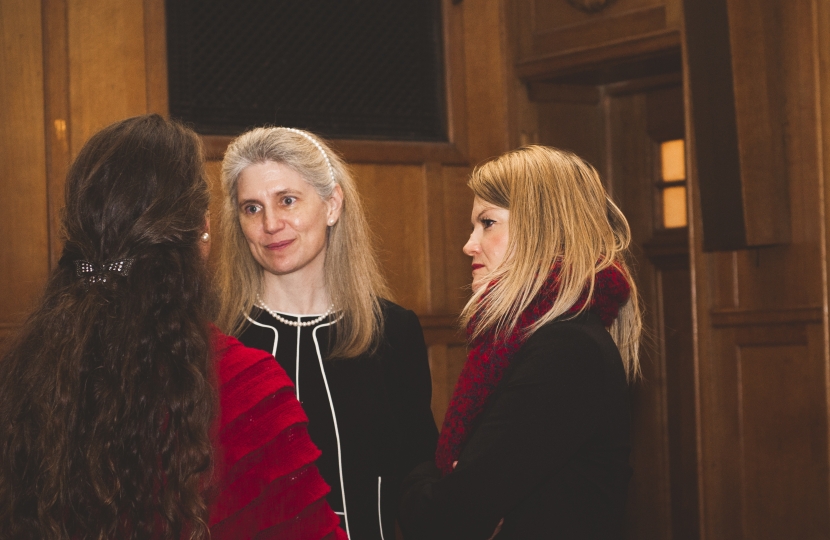 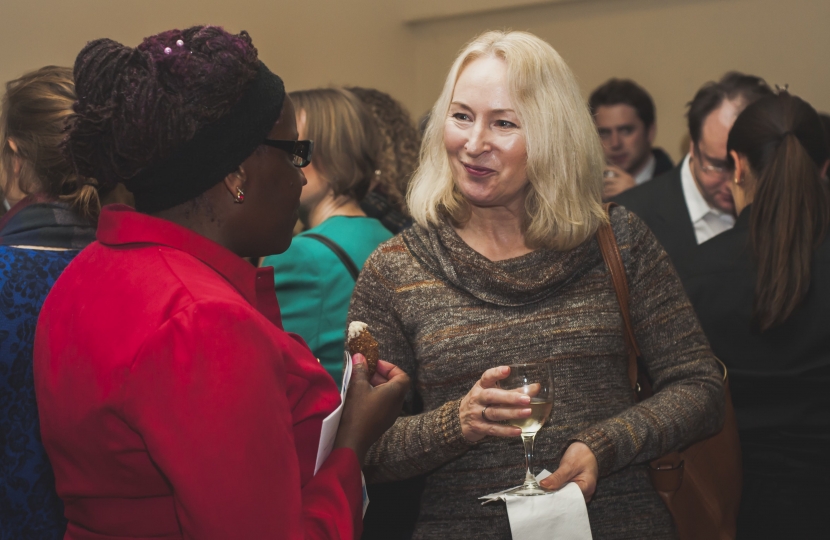 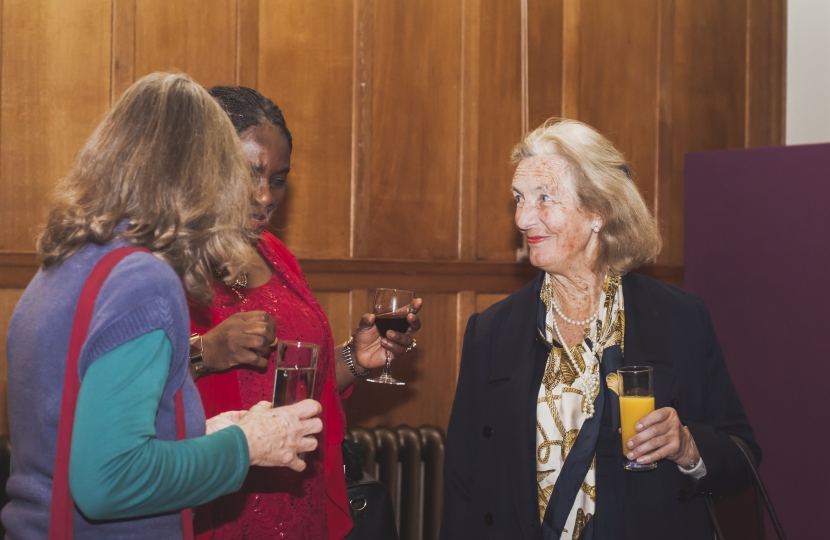 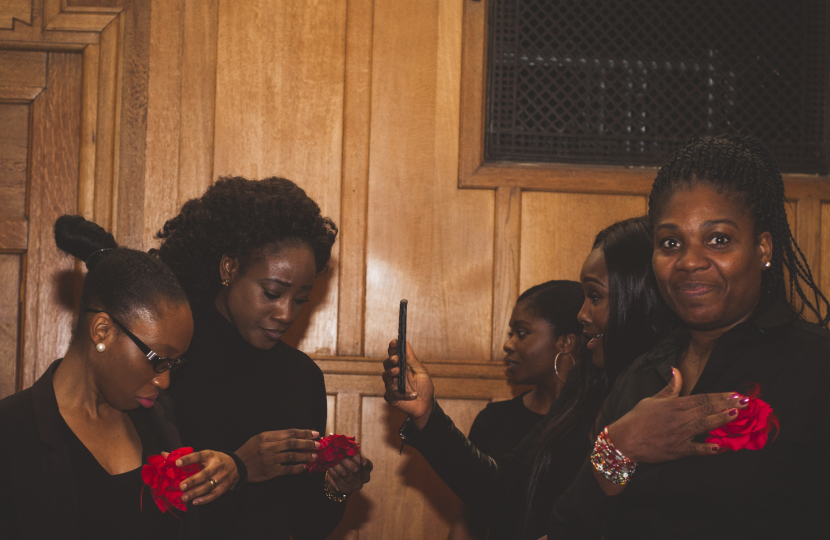 Baroness Stroud, co-founder of the Centre for Social Justice and recently appointed Chief Executive of the Legatum Institute, delivered the CCF’s annual keynote address on the subject of The Future of Social Justice at the CCF’s Annual Wilberforce lecture at Westminster Cathedral Hall.

Baroness Stroud said “my life’s work has been creating pathways to help people out of poverty and restore social justice. My new role at the Legatum Institute will help provide policy and on-the-ground research and solutions that help people move from poverty to prosperity.

I joined the Conservative Party when its strapline was “Party for the Vulnerable”. Right across the Party are good-hearted people who get up every morning and are motivated all day to fight for those who are disadvantaged and to improve the life chances of the many, and in particular the poorest. I served as a Government adviser to insure that welfare reform was conducted in the most socially just way.  My passion is that innovative thinking on social justice penetrates the political discourse and helps tackle the Government’s most intractable social problems.

I count it such a privilege to have been appointed to the House of Lords where I can speak out passionately these issues.”

Baroness Stroud inspired us with the words of Wilberforce: “You may choose to look the other way but you can never say again that you did not know.”

Philippa told us about the hard work involved in inspiring policy transformation. That it can sometimes be boring, that we can be criticised and our motives doubted.

We must be inspired to learn to see the end from the beginning that we need a vision of where we are and where we are going.

The Esther moment to know we are born unto such a time as this.

Philippa reminded us of another Wilberforce quote:  'We are too young to realize that certain things are impossible... So we will do them anyway.'

Gareth Wallace the CCF’s Executive Director commented “it was wonderful to hear Philippa Stroud, a passionate policy advocate for Social Justice, expound in detail her passion for delivering real social justice for the most vulnerable. As Philippa said “we need to stand in the gap, to protect people.”

It was inspiring to hear how Baroness Stroud, who started her career in social action, helping those around her, moved into championing social justice, changing the system to help the whole nation. “The scale of the solution we develop has to match the scale of the problem we are dealing with”

It is vital at this time of political uncertainty that we can discuss Policy is where political and philosophical theory meet the reality of life lived. Where the rubber hits the road.

It says in the Bible in Proverbs 29 v 18 that where there is no vision the people perish.

The Wilberforce Address is a CCF event known throughout Westminster for attracting high-profile speakers from Westminster. Speakers for previous addresses include William Hague, Iain Duncan Smith, Michael Gove and former Prime Minister, David Cameron. Last year we heard from Stephen Crabb MP who spoke on Faith and Freedom in Britain today, and how we protect these at the time when we are also confronting the challenges of intolerance and extremism.

Philippa’s life and career to date have been strongly influenced by her passion to tackle poverty and social breakdown. Philippa’s early career was in the voluntary sector including spending time in Hong Kong and Macau working with heroin addicts and ex-members of triad gangs who were undergoing rehabilitation. On her return to the UK she founded and directed a 4 stage project that supported people off the streets and into independent living before moving to Birmingham in 2000 where she became Executive Director of the Bridge Project, a voluntary sector project that provided supported accommodation for homeless men and women.

In 2004 she moved to London and was a founder member and then Executive Director of the Centre for Social Justice (CSJ), a think tank chaired by the Rt Hon Iain Duncan Smith set up to address the drivers of social breakdown in Britain. In 2006 she took on the role as Director of the Social Justice Policy Group – commissioned by David Cameron and Chaired by Iain Duncan Smith to develop Conservative Party social policy. This was the foundational work that developed the “Five Pathways to Poverty” and 190 policy proposals for the reversal of social breakdown.

In 2010 Philippa became Special Adviser to the Secretary of State for Work and Pensions, and in 2012 additionally to the Prime Minister. She was responsible for the development of the Social Justice agenda, working on the Government’s key Welfare Reform programme, the introduction of Universal Credit, the creation of Social Investment and the new child poverty measures.

Following the 2015 General Election, Philippa was ennobled and returned to run the CSJ as its Chief Executive. Philippa was recently appointed as Chief Executive of the Legatum Institute, a London based think tank dedicated to helping nations, societies, and individuals move from poverty to prosperity. Philippa takes up this role from November 2016.