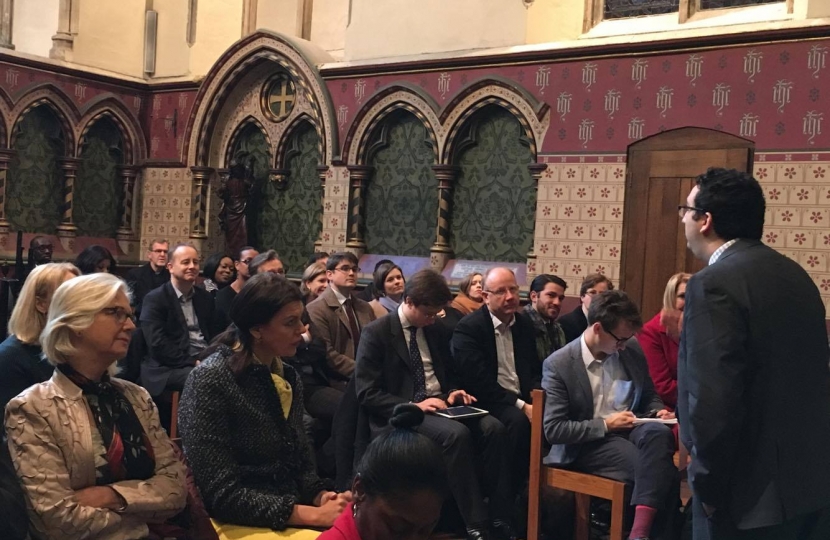 Edmund Burke Briefing events are a chance for CCF Director Gareth Wallace to interview high profile speakers, an expert in a particular topical field and an opportunity is open to ask questions and debate on an issue of current importance.

Michael inspired us with stories from the frontline of American politics and reminded us that we must not put our faith in politics but be faithful in politics.

He inspired us to think about how to engage in Politics from a Christian perspective to deliver positive change in our communities and our nation.

CCF members and visitors asked a range of perceptive and probing questions about the nature of political life, the pressures of campaigning, the complexity of policy making and the need to be tenacious in our commitment to making politics work for the good of all.

His book about Faith in American Politics Reclaiming Hope: Lessons Learned in the Obama White House about the Future of Faith in America was published on the 23rd of February 2017

Gareth Wallace Executive Director of the Conservative Christian Fellowship said “Michael is a friend, a mentor and am example. As my work takes me to the top of Political life in the United Kingdom, it is inspiring to have as a resource and a guide a book as full of realistic wisdom coupled with optimistic faith as Reclaiming Hope.

Beginning as a young intern and leaving as an experienced Presidential staffer Michael demonstrates that Christians can engage with both their hearts and their minds in principled and effective public service.

My motto is "who will lead my country when I am old." Faith leaders often assume that because I am young I am the answer. Not so, each generation needs to mentor a generation beyond and inspire further.

Reclaiming hope takes lessons from the White House that will help inspire Presidents of the far future. Let that be a message of hope and a lasting legacy of positive politics.

Michael directed faith outreach for President Obama’s historic 2012 re-election campaign. Michael was also one of the youngest White House staffers in modern American history: he served in the White House faith-based initiative during President Obama’s first term, where he led evangelical outreach and helped manage The White House’s engagement on religious and values issues, including adoption and anti-human trafficking efforts.

As a young Christian in his early twenties, Michael Wear found himself deep inside the halls of power in the Obama administration as one of the youngest ever White House staffers. Throwing himself wholeheartedly into transforming hope into change, Wear experienced first-hand the highs and lows of working as a Christian in government. From the central role of Christians in achievements such as the adoption tax credit and directing the president’s attention to human trafficking to the religious controversies and tensions that defined much of the president’s time in office, Reclaiming Hope gives an unvarnished account of life inside the most powerful office in the world. At a time when large numbers of thoughtful Christians argue for a withdrawal from participation in public institutions, Wear uses his experience at the white-hot centre of civic life to show how and why Christians must be involved in every aspect of cultural life — even if failures seem to outnumber successes — while working on behalf of the nation’s common good.